Time for another round of the general knowledge travel quiz, with questions ranging from the year the Golden Gate Bridge opened through to countries ending in -stan. There are 20 questions designed to challenge your general travel knowledge. We think 14/20 would be the score to beat. Good luck

How many countries end in -stan?

Which of these icons is the tallest (from ground level)?

Which of the following countries does NOT feature the Union Jack on its flag?

In which European city was musical film The Sound of Music set?

In which country are Boeing aircraft built?

Online check-in became available in 1999. Which airline offered it first?

Which country is known as the Land of Fire and Ice?

What is the fourth largest continent?

Where is the Eiffel Tower located in Paris?

Dakar is the capital of which African country?

In which city would you find The Little Mermaid statue?

What building would you find at 1600 Pennsylvania Ave in Washington DC?

Which of the 'new seven wonders of the world' is located in Jordan?

Before being rebranded Virgin Australia, what was the name of Virgin Blue's long-haul international operation?

Which of these countries does the Amazon River NOT flow through?

What is a tiki?

In which Japanese city can you visit Nijo Castle and Sento Palace and see the cherry blossoms in Maruyama Park?

On a map of the London Tube, which line is drawn in bright red?

After Rome's Colosseum, in whch of the following cities can you also find huge Roman amphitheatre still standing? 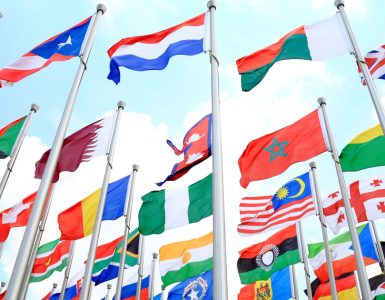 Flags of the world – Round 3

It has been a while since we first asked you to guess the country from the flag, but with so many flags available we though we would try and make it harder for round 3. There are 20 questions or flags to guess which...