Can you guess the location of these iconic tourist destinations

Tourists hot spots, they are everywhere and it seems you either go to them or avoid them, either way, can you guess the location of the following tourist traps. There are 20 questions and we think 15/20 would be a good result. Good luck.

Buckingham Palace is the British monarchy's administrative headquarters with a total of 775 rooms. In which English city would you need to be visiting?

The Dubrovnik Old Town is one of the most well-preserved medieval cities in the world with enormous walls dating back to the 11th century. Which country are you in when you visit?

Located in Patagonia on Lake General Carrera, the Marble Caves (also known as the "Marble Cathedral") were created more than 6,000 years ago by waves that eroded the rocks. Which country would you be in if you visited the caves?

At 12,388 feet of Mount Fuji is a famous tourist location in which country?

Situated 5,000 feet above sea level, Tianmen Cave is one of the highest naturally formed arches on the planet. In which country do visitors have to mount a 999-step "stairway to heaven" to reach the site.

In which city would you visit the Anne Frank House, where her family hid from the nazis in a secret annex, that requires a reservation months in advance.

In which country would your visit the Hasan II Mosque, the largest mosque in Africa and has the tallest minaret in the world at 700 feet tall.

In which country would you find the Blue Lagoon? Which contrary to popular belief, isn't a naturally-occurring phenomenon, but made from a nearby geothermal power plant's discharge.

Construction on the La Sagrada Família began in 1882 and still isn't finished. In which Spanish city would you visit this cathedral with over 4.5 million other tourists each year.

In which country would you visit Ha Long Bay, where the best way to the awe-inspiring limestone towers is by boat. In fact, many tourists stay overnight on a boat in the bay.

In which country would you visit Chichen-Itza, where ancient Mayan settlement dates back to the 400s and was abandoned in the 15th century.

Fans of "The Lord of the Rings" can visit Middle Earth in the form of Hobbiton, the movie set used to film scenes in the movies. In which country can you visit in the Shire?

Which city in India is closest to The Taj Mahal, which was built by the emperor Shah Jahan between 1631 and 1648.

In which country would you find Ba Na Hill, whose attractions include cable cars through the mountains, the Golden Bridge held up by enormous stone hands, and theme park rides.

In which city in the United Arab Emirates would you visit to see the Burj Khalifa, the tallest building in the world, at 2,716 feet tall.

One of the UK's most-visited natural attractions, the Cliffs of Moher stretch along the coast for five majestic miles. The rugged cliffs offer unparalleled views of the ocean below.

The world's largest salt flat, Salar de Uyuni is located in which country?

The Parthenon, built in the 5th century BCE for the goddess Athena is located in which Greek city?

Near which city in Egypt would you find The Great Sphinx, with the face of the ancient Egyptian King Khafre is 240 feet long and 66 feet high.

Which Brazilian city are you looking over from the 98-foot-tall statue in Tijuca Forest National Park, Christ the Redeemer?

Guess the location of these iconic tourist destinations 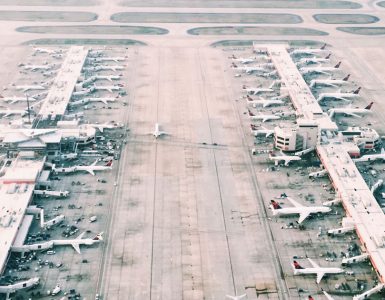 How well do you know international airports?

This quiz will sort out the frequent flyers from the rest, with a combination of International Air Transport Association (IATA) codes and airport names in major capital cities, this quiz tests if you have actually...

Can you guess the city from a Google Maps view? – Part 3

Have you used Google Maps at some point, to look around your own city or explore a new city before you arrive? We have removed the labels and selected 20 cities from around the world, all that you have to do is identify...